A complete set of books produced by William Morris at his Kelmscott press.

About the Kelmscott Press 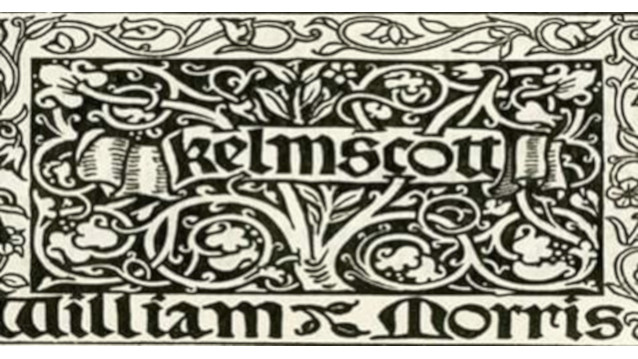 William Morris (1834-96), the 19th-century designer, social reformer and writer, founded the Kelmscott Press in Hammersmith in 1891. He wanted to revive the skills of hand-printing, which mechanisation had destroyed, and restore to books the high standards achieved by the earliest printers. Morris had developed an interest in printing as a result of his friendship with Emery Walker, an expert on typography and a fellow-member of the Hammersmith Socialist League. Together they studied early printed books, especially ‘incunabula’ – books printed before 1501.

Frustrated by the declining standard of the printed book, Morris set up his own press “with the hope of producing some which would have a definite claim to beauty, while at the same time… not dazzle the eye, or trouble the intellect of the reader by eccentricity of form in the letters.” Morris named the press after Kelmscott Manor, his beloved country house in Wiltshire.  A number of other private presses were set up in England to perpetuate Morris' aims, including the Doves, Eragny, Ashendene and Vale Presses.

William Morris (1834-1896) was perhaps the most versatile genius of the Victorian era.  As well as respected poet, he was a major figure in the development of interior design, especially in the Artis & Crafts Movement, and a leading light of early British Socialism.  Born into wealth and privilege in 1834 in Walthamstow, Morris’ own financial security was guaranteed early in life.  Indeed, without this capitalist start in life it is doubtful if he could have contemplated his hazardous career as designer, poet and revolutionary.

Morris went up to Oxford in 1853, originally destined for a career in the church, but through his friendship with Edward Burne-Jones and others he found himself drawn to the arts, especially poetry.He also became fascinated by all things medieval and after trips to the churches and museums of Northern France during his vacations, he decided to become an architect.His career in architecture was short-lived, although his interest in literature and the arts continued.

Through Burne-Jones’ friendship with the Pre-Raphaelites he met Dante Gabriel Rossetti, then known best for his paintings, who was to become a great influence on Morris.  Whilst working on a mural at the Oxford Union, Morris encountered Jane Burden, who had been noted already by Burne-Jones and Rossetti as a possible model and became totally smitten by her.  Despite the fact that Jane’s father was an ostler, Morris married her in 1859 and they moved into “The Red House” at Bexleyheath.  Morris immersed himself in designing and decorating the interior, giving him the idea of setting up his own company to produce such artefacts and, in 1861, Morris, Marshall, Faulkner & Co., was set up.

As business grew, Morris moved back to London and Jane Morris became increasingly close to his friend Rossetti for whom she was a frequent model.  Rossetti was obviously in love with Jane, had perhaps been so from their first meetings, painted her obsessively and wrote her love poetry.  Morris appeared to have accepted this relationship – his advanced views on marriage meant that he thought spouses should be free agents – but his poetry reveals his unhappiness.  He immersed himself in several projects, visiting Iceland and translating sagas, giving lectures on the decorative arts designing for Morris & Co., and in 1875 assuming sole control of the firm.

During the 1870s, Morris began to be interested in the political questions of the day, affected by the government’s reaction to events in the Balkans, but gradually concentrating on domestic, social and economic issues.  He had joined the Democratic Federation but resigned in 1884 to form the Socialist League.  His socialist activities alienated many of his artistic friends who now viewed him as a dangerous revolutionary rather than a harmless mediaevalist; Jane Morris avoided his socialist friends and Edward Burne-Jones blamed them for Morris losing his sense of humour.  In 1890, Morris was ousted from the League by an anarchist faction and he distanced himself more from active politics.  In 1891, Morris embarked on his last great project, setting up the Kelmscott Press and producing 53 titles during the next five years.  The book had always appealed to Morris as an art form and his hand-printed titles were a reaction against the shoddy products of Victorian mass production.

The last few years of his life were marred by ill-health, although he insisted on attending engagements despite being ever frailer.  He died on 3rd October, 1896.

A biography of William Morris is available in Oxford Dictionary of National Biography.

View items from this collection in our Kelmscott Press Collection Showcase