Big insights in the small ads

Newspaper archives are a fantastic resource for gazing into the past. A quick delve into their ragged pages can tell us about the breaking stories of yesteryear.

But between the stories, the small advertisements that pepper the yellowed sheets can provide a better insight into social and cultural attitudes.

In his Classified Britain series, which returns this week, radio presenter James Naughtie explains: “Classified ads were the marketplace, the things you had to have alongside all the cheap deals and the second-hand.”

In the Radio 4 show, Naughtie takes an odyssey through the country’s front-page ads. He calls them his “window on the world” which “catch the clamour of life”.

Susan Taylor, librarian of special collections at the Mitchell Library in Glasgow, agrees.

“Advertisers have to be keen observers of society in order to profit from it, and of course it’s also interesting to see how they influence society,” she said.

“Because an advert is so concentrated, it has to be punchy to grab your attention, so quite often they sum up what is happening at the time and what people are concerned about.

“Anyone can come into the library and look at our newspaper archives.

“We often have school groups in and it’s the adverts that grab their attention.”

Susan says the core concerns of society haven’t changed – it’s still about looking like your favourite star, curing minor ailments, holidays, affluence and so on – but there have been some shifts.

“It’s interesting to look at how roles of men and women were portrayed in adverts decades ago, where for the men it was about building up strength for work, while for women it was about looking nice, finding a husband, creating a lovely house.

“It’s quite jarring to see the positive attitude to cigarette adverts, where they state it’s good for your lungs.”

As the world becomes increasingly digital, Susan fears we may no longer be able to gauge social attitudes through adverts as we do now.

“Now adverts are going online, where are the records going to be, how will we make comparisons over the years?” she said.

Pictured right, we take a look at some of the front- page adverts to be found in The Sunday Post from the 1920s to the 1960s. 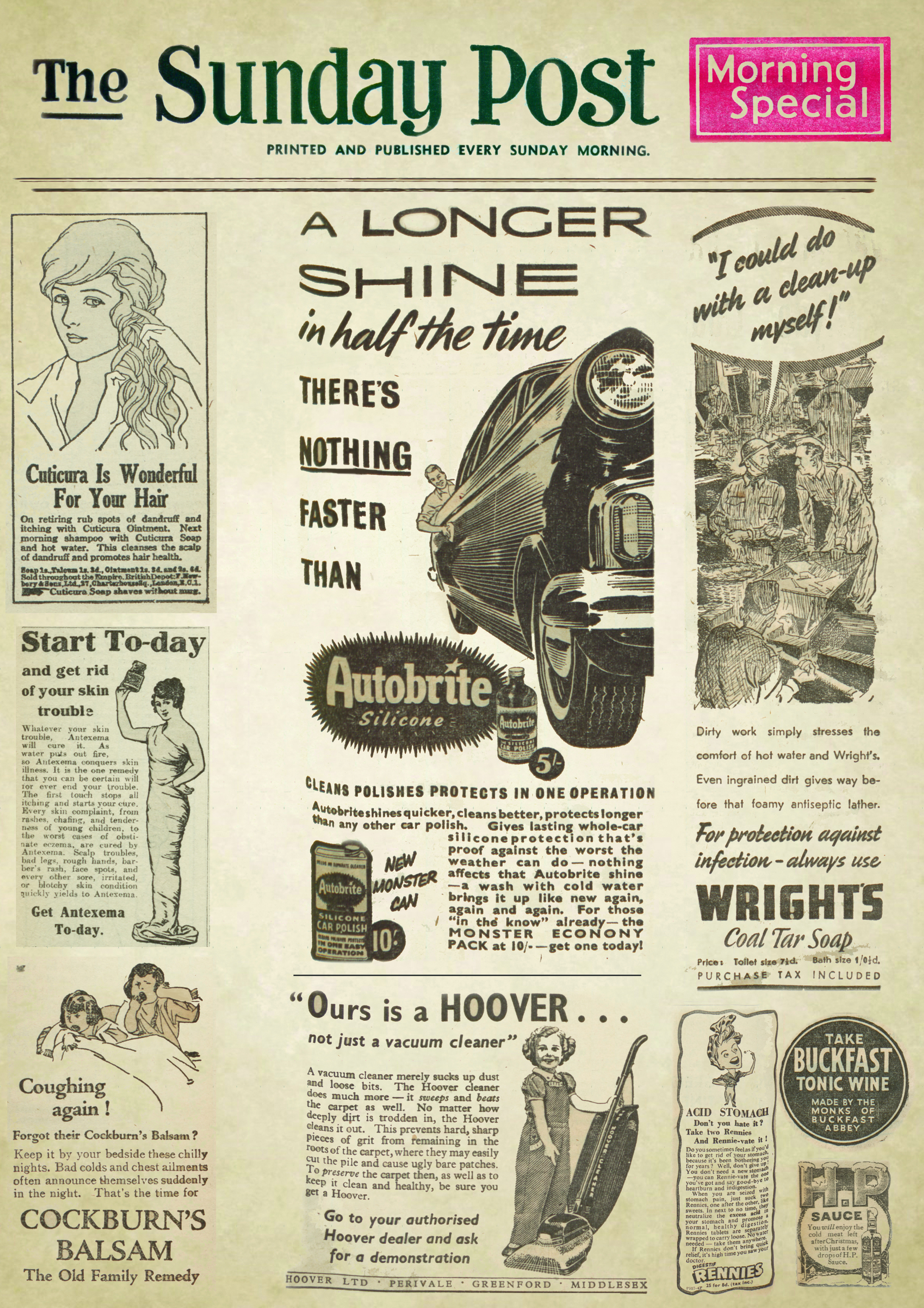 For more than 100 years The Sunday Post has been a staple of Scottish life.

In fact, the readership was so high that in 1969 it made the Guinness Book of Records for the highest per capita readership penetration.

So it’s little wonder that advertisers, big and small, were desperate to have their products included in the paper.

The composite front page above shows just some of the adverts that appeared throughout the years.

The ads in 1922, some of which can be seen down the left of the page, paint a grim picture of what life was like at the time.

In the New Year’s Day edition of that year, there are no fewer than 10 adverts promising miracle cures for everything from coughs to skin conditions.

In 1941, ads appear selling products that might be sent to the boys on the Second World War frontlines.

The ad above depicts soldiers scrubbing clothes under the heading: “I could do with a clean-up myself.”

And as the paper moves into the post-war era, adverts spring up offering a more aspiration lifestyle, like the one seen here for Autobrite car polish that ran in May 1960.

A regular theme of advertisements was health and wellbeing.

Many of the old adverts contain what might be politely described as dubious science. One advert, for Brand’s Essence (of meat), read: “When we are ill we are actually living on our own flesh and muscles. Our body is breaking them down and living on the protein. We can only stop this by taking in more protein.”

And an ad for Steedman’s Soothing Powders states: “Contains no poison.” The only problem was that it did – mercury.

It is interesting to note the staying power of some well-known brands.

While there are hundreds of products and adverts that, for various reasons came and went, there are others that children nowadays would instantly recognise.

Advertisements for the likes of Rennies, HP sauce, Buckfast and Cadbury’s appear throughout The Sunday Post’s pages.

There are also ads for Hoover vacuum cleaners, before the brand became so well known that all vacuums were dubbed Hoovers.

Place an advert - guess the year!