A small collection of books published in Braille. 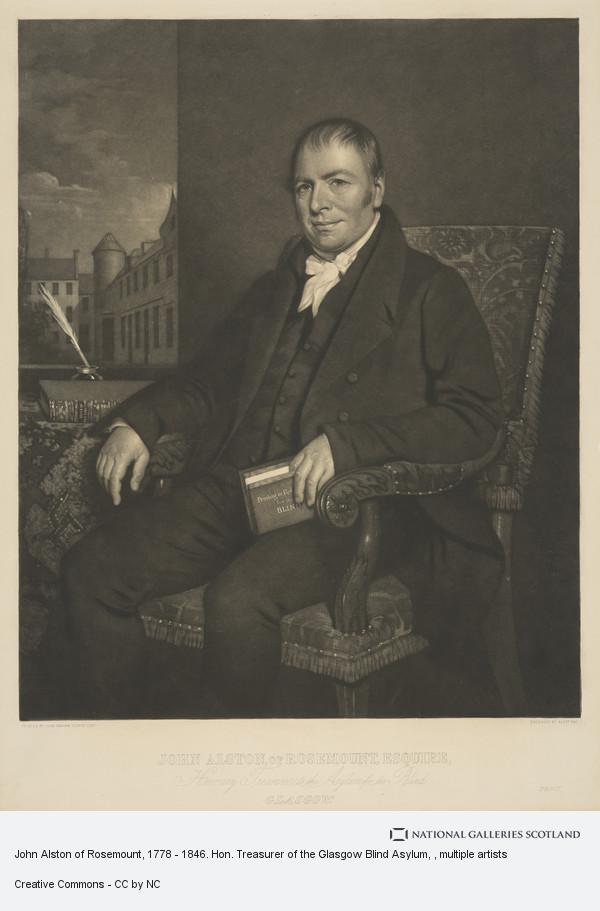 John Alston was the director of the Glasgow Asylum for the Blind, founded in 1804. He published his first system of writing at the Asylum in 1836. He argued that embossed alphabets should closely resemble the roman alphabet of the seeing, thus allowing sighted people to teach the blind, a point of view which was then shared by many others. In 1838, Alston produced the first embossed copy of the New Testament at the Asylum printing press.

Alston published his first ‘specimen of writing for the use of the blind’, an adaption of a Dr Fry’s sans serif version of the Roman alphabet, in 1836. Although Alston was aware of experiments with arbitrary alphabetic systems, he argued that ‘the more closely the alphabet for the Blind could be assimilated to the alphabet of the seeing; so much a greater boon would be conferred upon them’. He was awarded a government grant of £400 to develop his system in 1839.

In 1842, Alston published his Statements of the Education, Employments and Internal Arrangements Adopted at the Asylum for the Blind, Glasgow. Fifty years later, subsequent editions of Alston's Statements were still being produced. In it he gives an example of his ‘improved methods of writing for the blind’, employing raised capitalized roman characters alongside alternative alphabets conceived by James Gall (d. 1872) of Edinburgh and T. M. Lucas of Bristol.

Although Braille is now regarded as the standard tactile reading system for blind people, this collection features three such examples from the 19th century devised by John Alston (1778–1846), William Moon (1818–1894) and James Gall (1808-1895).

Englishman William Moon lost his sight at the age of 21 and, having found existing reading systems unsatisfactory, decided to devise his own. His Moon system consists of embossed shapes, some of which resemble letters. In 1856 he set up the Moon Printing Works which operated until 1960. It is considered easier to learn than Braille, especially for people who lose their sight in later life. In 1880, out of 1626 blind persons living in Glasgow, 826 had no means of reading at all, 733 had knowledge of Moon, 33 of Alston, and 34 of Braille.

Educationalist James Gall of Edinburgh invented a triangular alphabet which used both upper and lower case and produced the first embossed books in 1826. Unlike Alston however, his system failed to gain favour as his symbols did not resemble Latin letters.

Glasgow Asylum for the Blind

The Blind Asylum was founded in 1804, with the first building on Castle Street erected in 1828 by public subscription.

A competition was held to design a replacement building in 1878. It was designed by William Landless in what is almost a pastiche of the Scots Baronial style and was completed in 1881 at a cost of £21,000.

A report of the Glasgow Asylum for the Blind in 1884 stated: "The Asylum devotes itself to two modes of assisting the blind: 1st: Educating the young in various branches, including first-rate musical tuition; 2nd: Teaching various trades and providing employment in the workshops." Board and lodging was provided, as well as education. Costs were covered by subscriptions, donations, bequests and the sale of articles such as brushes, baskets and bedding manufactured in the workshops.

In 1934 it was purchased by the adjacent Glasgow Royal Infirmary, for conversion into an Out-patients' Department.