A collection of chapbooks, mainly printed in Glasgow in the 18th and 19th centuries.

The Mitchell Library has a collection of around 1100 chapbooks - the majority of them printed in Glasgow in the 18th and 19th centuries. These inexpensive, small, paper-covered booklets were the main type of reading material available to most people at that time. They were sold around the country by pedlars or 'chapmen' who would carry bundles of them among their wares.

Detail from The King's Muster, published in Glasgow in 1823 by R. Hutchison.

Chapbooks emerged out of an earlier ballad tradition and the printers produced material that they thought would appeal to readers. With their crude illustrations, these flimsy little books covered every kind of humorous, fabulous and murderous tale. Abridged versions of novels were common and the most popular contained songs and poems. For many people, it was the only affordable reading material available to them. In Glasgow, the main producers of chapbooks were James Lumsden & Son, who produced chapbooks for children and Brash and Reid.

Early Scottish chapbooks often copied material from England, but by the 18th century home-grown material began to appear, featuring places, events and people that were particularly Scottish. The late 18th and early 19th century was the golden age of chapbook publication in Scotland, with more and more places, not just Glasgow and Edinburgh, producing them.

Despite the poor quality of their appearance, the large number of chapbooks which survive today testify to the extent of their interest and durability. 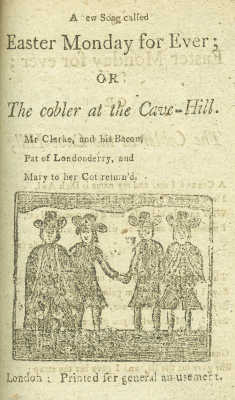 Cover of A new song called Easter Monday for ever, or, The cobler at the Cave-Hill. Mr. Clarke and his bacon. Pat of Londonderry. And, Mary to her cot return'd. c1800.

View items from this collection in our Chapbooks Collection Showcase.