A collection of late 17th century pamphlets on the political and religious upheavals of the time. 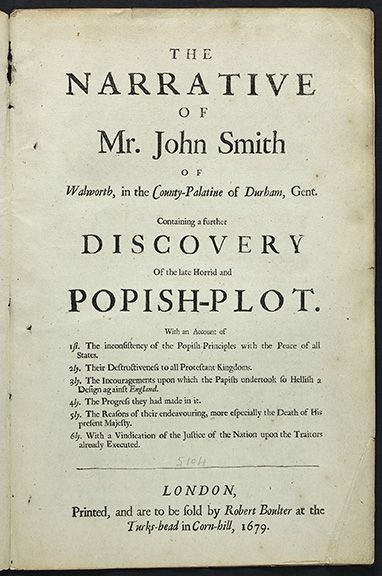 Title page of The narrative of John Smith of Walworth, in the County-Palatine of Durham, Gent. Containing a further discovery of the late, horrid and Popish-Plot. 1679.

An important collection of late 17th century pamphlets concerning the political and religious upheavals of the time. Many of the pamphlets concern the Popish Plot of 1678, a fictitious conspiracy concocted by Titus Oates and others. They claimed that there was a Jesuit plot to assassinate King Charles II and put his brother the Duke of York on the throne. These false, but widely believed, allegations were responsible for an outbreak of anti-Catholic hysteria which resulted in the execution of 35 innocent people.

The majority of the pamphlets were published in England but there are a few Scottish items. They were donated to The Mitchell Library by the Earl of Crawford and Balcarres, Haigh Hall, Wigan in 1894.