A large collection of material from one of Scotland's best known writers for children.

Lavinia Derwent (1909-1989) was one of Scotland's best-loved authors. She delighted generations of children with her tale of Tammy Troot, Macpherson (the cheery Glasgow message boy) and Sula (her imaginery West Coast island). She also wrote a popular series of autobiographical 'Border' books.

Born Elizabeth Dodd in 1909 near Jedburgh, as a young woman she helped on father's farm and kept house for her brother who was a minister. She developed a capacity for hard work which never left her. In the 1930s, she went to work for Collins publishers in Glasgow, where she stayed until after the Second World War, eventually leaving to become a full-time writer and broadcaster. In 1970 she received an MBE.

Although a very private person, Derwent was never retiring but sociable and hospitable. She was a tireless visitor to schools, libraries and bookshops, reading and encouraging reading. A long-standing member of the international writers' group PEN (at one time secretary of the Scottish branch) she attended conferences around the world. She lived most of her life in her adopted Glasgow but her heart was always in the Borders.

Read a full biography at the Oxford Dictionary of National Biography 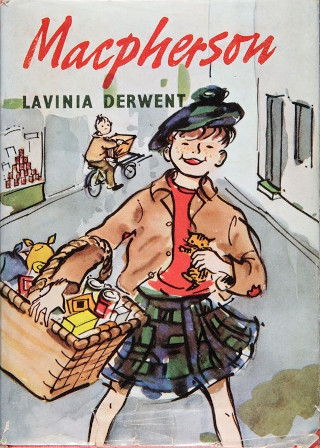 As well as the personal papers of Lavinia Derwent, the collection contains around 200 additional items: proof copies of her books, scripts for radio and television, fan mail, magazines and catalogues. Most of the books were written by Lavinia Derwent but some are included because of their association with her. For instance, some of the Collins publications contain no mention of her name but she would most likely have been involved in the editing of them.