The Mitchell Library holds an extensive collection of maps and atlases with some 35,000 sheet maps and 300 atlases. These range from a 1647 edition of an early world atlas, Theatrum Orbis Terrarum by Joan Blaeu, to current editions of maps published by the Ordnance Survey.

We have maps covering most areas of Scotland with Glasgow, Lanarkshire, Renfrewshire and Dunbartonshire areas very well covered. There are less detailed maps available for the rest of the United Kingdom.

Admiralty charts, geological survey, land capability and maps from the Macauley Institute for Soil research are available on Level 4, in the Mitchell Library.

​​​A collection of Admiralty charts with coverage appropriate for navigation of deep sea, coastal passages, port approaches and harbour berthing.

These represent a useful picture of the growth of the city featuring streets, parks, cemeteries, churches and schools. 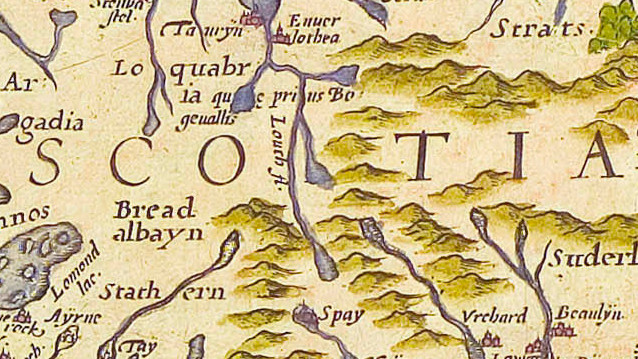 The Cairns Mitchell Map Collection consists of 65 early maps and sea charts relating primarily to Scotland. They were orginally part of a larger donation given to The Mitchell Library in 1923 and 1928 by the Rev. John Cairns Mitchell, a retired clergyman, who lived in Ardnadam in Argyllshire​.

The maps provide an excellent overview of the way Scotland and its coastline has been depicted from the 16th century until the late 1800s. Many of them were published abroad, including a number of French maps. For some strange reason, there is a solitary map of Denmark, dated 1814.

A collection of maps showing how the city has changed over the centuries, spreading out from the original settlement around the Cathedral. Most of these maps are not contemporary but drawn a long time after the dates they represent, using available data to show how the city would have looked at the time. Our maps are not originals, except for those which first appeared bound in with books.

In 1746, the Duke of Cumberland ordered a survey of the whole of Scotland to be undertaken by William Roy. It was completed in 1755 at a scale of 1000 yards and was surprisingly accurate. The maps provide a valuable over view of Scotland showing hills, rivers, settlements, roads and tracks.

A collection of mostly 6” and 25” sheet maps of Lanarkshire, Dunbartonshire and Renfrewshire as well as many other counties in Scotland. Dating from the mid 1850s, the maps show almost all of the physical changes which have overtaken the city and are particularly useful as historical documents showing locations such as rivers, railways, parks, cemeteries, factories, churches and schools.

The Mitchell also has a full set of Ordnance Survey Explorer and Landranger maps for Scotland – useful for travel, walking, cycling and hill climbing.

Discover recommended reads and other resources from our online catalogue about the fascinating world of maps.

The National Library of Scotland has a digitised collection of maps dated between 1560 and 1964 that are in colour and zoomable.