The Moody-Manners Opera Company (1898-1916) was a hugely successful opera company, touring Britain, Ireland, North America and South Africa. It was established by singer and impresario Charles Manners and his wife, singer Fanny Moody who gifted the working library of the company to The Mitchell Library in 1934.

About the Moody-Manners Opera Company

Charles Manners (1837-1935) was born Southcote Mansergh in Hertfordshire, and trained as an opera singer in Dublin and London, later working with D’Oyly Carte Theatre Company, creating the part of Private Willis in ‘Iolanthe’ in 1881.

He joined the Carl Rosa Opera Company as a principal bass where he met ‘the Cornish Nightingale’ soprano Fanny Moody (1866-1945). Moody had trained in London after an amateur career, before joining the Rosa company where she made over 300 appearances.They married in 1890 and sang together in Covent Garden, later appearing together in the 1892 London premiere of Tchaikovsky’s Eugene Onegin. 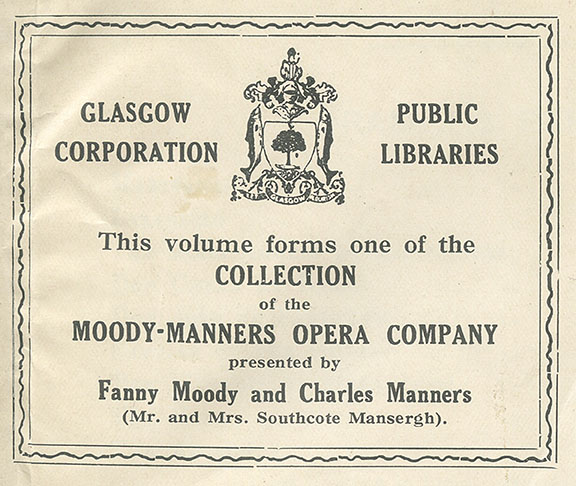 The collection totals almost 3000 books, manuscripts, scores, librettos and orchestral parts for about 250 operas in the company’s extensive repertoire as well as ballads and songs.

The scores include some rare operas and some rare annotations by famous conductors. The core collection has been catalogued, see below, but many volumes that appear to be duplicates have not been catalogued.

Many of the scores are unique as they include the musical directions paste-downs, and annotations, cutting out sections of music, and/or making musical connections between sections.

Irish composers such as M W Balfe (“I dreamt I dwelt”), W M Rooke (“Amilie”), W Vincent Wallace (“The Amber Witch”) are well represented alongside composers in German, French, Italian and other languages, such as Tchaikvosky (including ‘Eugene Onegin’), Wagner, Verdi, Rossini, Handel, Mozart, Donizetti and many more.

The collection also includes some illustrated books of opera costume.

View items from this collection in our Moody Manners Collection Showcase 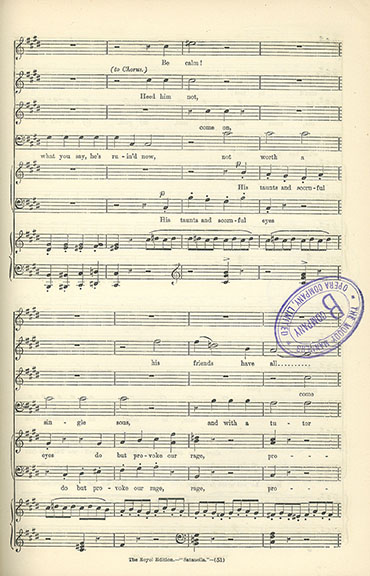 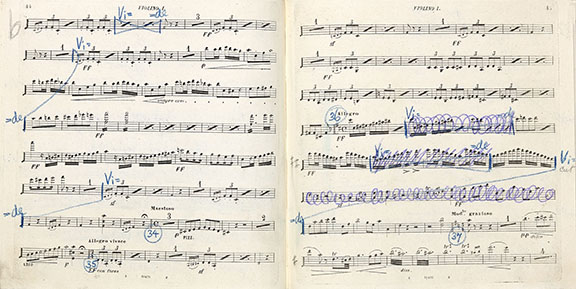