A photographic archive of one of the most famous companies of locomotive builders in Britain.

The North British Locomotive Company Collection is the photographic archive of one of the most famous companies of locomotive builders in Britain. The North British Locomotive Company (NBL) was formed in 1903 by the merger of 3 companies in Glasgow: Neilson, Reid and Company at the Hyde Park Works, Dubs and Company at the Queen’s Park Works in Polmadie and Sharp, Stewart and Company Limited at the Atlas Works in Springburn. This created the largest locomotive building company in Europe, capable of building 600 engines per year.

After the liquidation in April 1962, the joint managing director of NBL suggested that the photographic records be deposited in the Mitchell Library. The Collection consists of approximately 9,000 glass negatives plus approximately 6,500 photographic prints. By the 1920s, the staff photographers of NBL were producing a variety of studies. Included are many photographs of locomotives being transported along the city streets en route to Glasgow docks. Also available are many spectacular studies of NBL products being loaded on to ships. The photographers also showed groups of workers or even individual employees - there appear in the Collection many prints, especially dating from the 1940s and 1950s, which record the social and recreational activities of employees. 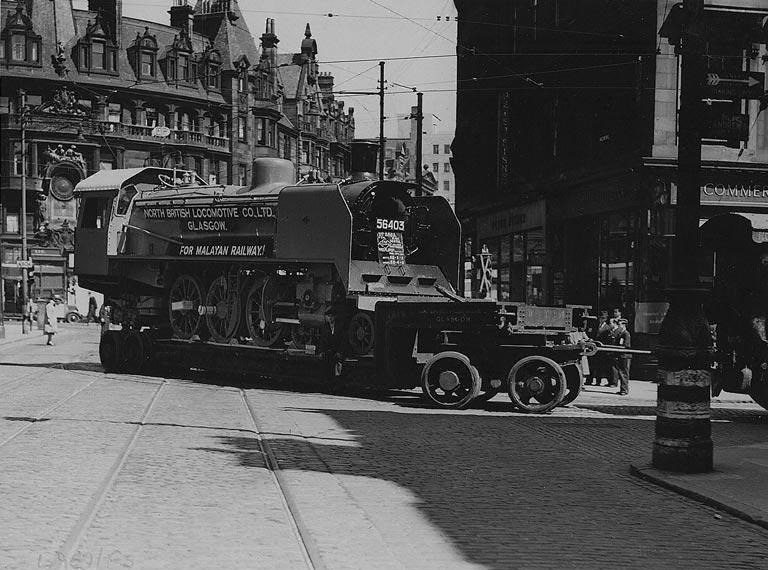 History of the Company

The three companies had interesting histories as independent firms. In 1837 the partnership of Mitchell and Neilson, general engineers, opened a workshop in Hyde Park Street, Anderston. By 1843 the senior partner of Hyde Park Foundry was the twenty four year old Walter Montgomerie Neilson. In the next twenty five years an extensive locomotive building industry was to grow in Scotland. More than any other individual Montgomerie Neilson has to be recognised as the key figure of the industry's development. In 1862 Neilson, assisted by Henry Dubs the works manager and a partner at the Foundry, established the new Hyde Park Works on a site at Springburn. No area in the country matched Springburn as a centre of locomotive building. Already established in the district were the Cowlairs Works of the North British Railway and the St. Rollox Works of the Caledonian Railway.

To replace Dubs, who left to found his own business, Montgomerie Neilson appointed James Reid. A former employee at the Foundry in Anderston, Reid also accepted the offer of a partnership in Neilson and Company.

A few years of production saw Neilson and Company established as one of the largest producers of railway engines in the British Isles. Despite the trading success the partnership between Neilson and Reid was not happy. By 1876 James Reid had exercised his option to buy out the senior partner. Walter Montgomerie Neilson left the company he had created an embittered man.

For the next fifteen years James Reid, as sole partner, was the master of Hyde Park Works. He died in 1894. The name of the business was altered in 1898 to Neilson, Reid and Company.

After leaving Springburn in 1863 Henry Dubs set up his own locomotive business. Dubs and Company built a new factory on a site at Polmadie. From the outset the business proved very successful. The first locomotives built by Dubs and Company were delivered to the Caledonian Railway during the winter of 1865-1866. As an independent company Dubs built almost 4,500 locomotives. By 1903 the company had become the second largest private builder of railway engines in the British Isles.

The company with the longest history in locomotive building was, in 1903, a relative new-comer to Glasgow. From 1832 to 1887 Sharp, Stewart and Company had conducted various engineering activities from the Atlas Works, Manchester. The first locomotive built at the Atlas Works had appeared in 1833. From this modest start the company developed a large trade as manufacturers of successful railway engines. By the 1880s lack of space for expansion had forced the directors of Sharp, Stewart and Company to search for new premises.

In 1884 Walter Montgomerie Neilson had returned to build locomotives in Springburn when he founded the Clyde Locomotive Company Limited. The new premises were separated from Hyde Park Works by the width only of the local branch line. The venture was not a success. Potential customers continued to order from Neilson and Company or from Dubs and Company. In 1888 the Clyde Locomotive Works were sold to Sharp, Stewart and Company. The new arrivals changed the name of their acquisition to the Atlas Works, Springburn.

By the early twentieth century the city locomotive builders were being challenged for orders in their traditional markets overseas. German and, in particular, American competitors were taking export orders from the Glasgow manufacturers. To meet this competition, the three local firms merged to form the largest private locomotive building company outside the United States of America. North British Locomotive Company Limited was incorporated in April 1903. The company achieved many triumphs in railway engineering but also experienced long spells of financial difficulties during its span of almost sixty years. A financial crisis in 1962 led to the liquidation of NBL. 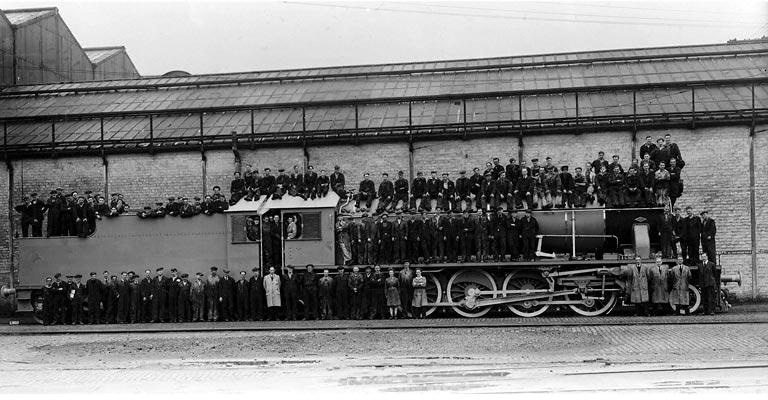 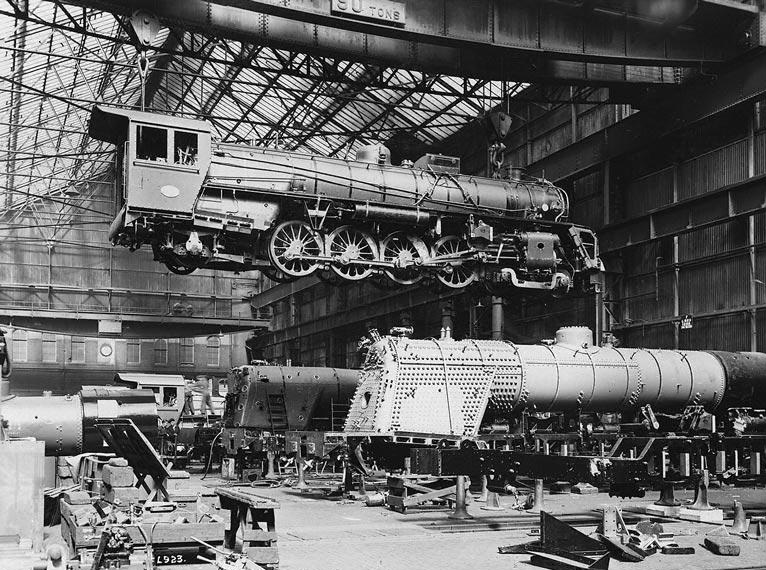 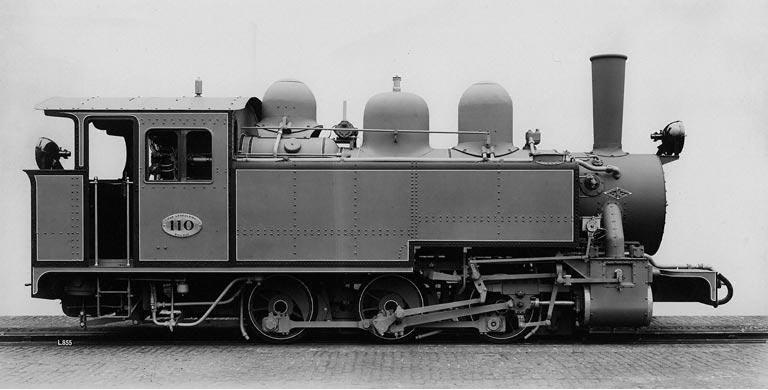 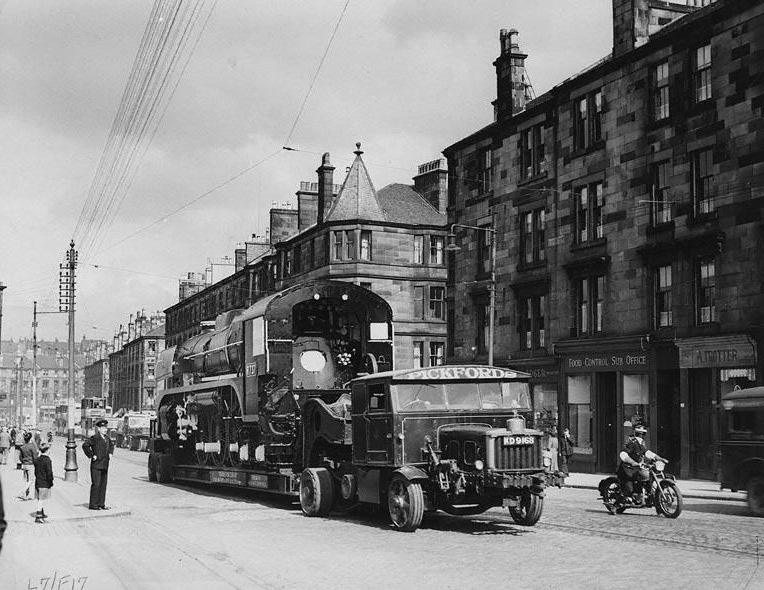 Street scene, as a 4-8-4 locomotive, part of an order for 70 built by the North British Locomotive Company for Victorian Railways (Australia) is carried along Springburn Road on a low loader. The carriage of locomotives along Glasgow streets was a spectacular event, but it did affect public transport services - slow moving tram cars are lined back as far as the camera recorded.